Google Fiber infographic: Will it take over the world? 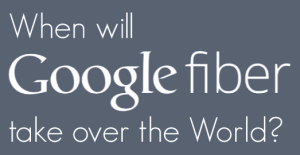 Unless you've been under a tech news rock for the past couple of weeks, you've probably heard all the hype about Google Fiber.

For the uninitiated, Google launched a fibre broadband service in Kansas offering 1Gb speeds for reasonable prices - blowing the US competition out of the water (details below).

Hundreds of column inches have been dedicated to this 'new' superfast phenomenon; most of which started out raving and ended up moving back towards a more realistic stand point. Remember kids, Google Fiber is in one US city and the smart money is the whole play being one designed to kick the American broadband incumbents up the backside - while giving Google a great test bed for its more usual ad services (especially in the TV space).

In truth smaller, less newsworthy providers are already offering 1Gb (and even 2Gb) broadband in less fashionable countries (including this one). And it remains to be seen what real benefit most of us would currently get from broadband so fast you could download a movie quicker than you could blink.

But we at Broadband Genie have never been ones to look a Google gift horse in the mouth so we asked ourselves: if Google did the implausible and actually became a home broadband network player, at its current rate of expansion (equally implausible, admittedly), how long would it take to assimilate us all into Google World...?

When will Google Fiber take over the world? by Broadband Genie is licensed under a Creative Commons Attribution-NoDerivs 3.0 Unported License.

To embed 'When will Google Fiber take over the world?' on your site: copy and paste the code below: