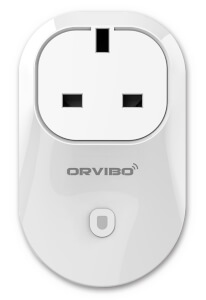 Think smart home and what usually comes to mind are cool-yet-pricey gizmos like the Google Nest thermostat or Roomba robot vacuum. But over the past few years we’ve seen an explosion of clever home gadgets at ever lower prices which are bringing the possibilities of connected home hardware to a wider audience.

The Orvibo S20 Smart Wi-Fi Plug is an example of how accessible this technology has become. At around £20 (or even a little less if you shop around) It’s one of the cheapest smart home gadgets going, and although very simple it’s a great introduction to this world.

The S20 is a pass through power socket with wireless connectivity which allows it to be controlled via a mobile app from either inside or outside the home. It can be switched on or off with the touch of a button or used as timer. That’s all it does, but since it is just a regular socket you can use it to control anything from lamps to kitchen appliances.

Orvibo S20 set up and configuration

Setting it up just takes a few minutes, though is not without its quirks. After installing the ‘WiWo’ app from the Apple or Android app stores, select your Wi-Fi network and enter the password, then search for the S20 to connect it to the network. That’s the theory anyway, but it took a few goes before the app would either accept the Wi-Fi password or find the S20. Force closing the app and restarting seemed to kick it into action.

Once the app and socket are talking it can be activated/deactivated by tapping the power switch, or controlled via a timer. The timer is reasonably flexible, allowing multiple on or off states down to the second, in addition to a countdown option. It would be nice if there was a random option so you’re not sticking to a strict schedule when controlling a lamp for security (always a dead giveaway if anyone is casing the joint) but this can be worked around by using slightly different times for each day.

You can also manually control the socket the old fashioned way by pressing the button on the front of the device, with changes reflected in the app.

If you run into any real problems it’s likely to come when trying to use it from outside your home Wi-Fi. That’s a problem when it’s one of the major selling points.

Initially the plug refused to accept commands from an external connection. Setting a port forwarding rule on the router made no difference and the instruction manual offered little guidance. What did eventually work was creating a user account from within the app. Once logged in (and the app again restarted) the S20 began accepting external commands.

The true price of buying very cheap technology is often the user friendliness, support and reliability. Orvibo are a Chinese company and while their translation is better than some the included instructions and help are barebones, so if you run into any real problems your best avenue for support is going to be the online community. So far I’ve had no further problems that haven’t been solved by turning the app off and on again, but if you’re used to something like the Philips Hue, Belkin WeMo or Nest ecosystems this is certainly not going to feel as slick.

The other major drawback of the Orvibo S20 - though it’s not unique to this brand - is the lack of support for third party smart home hardware and software. There is no IFTTT channel and the only official way to control the socket is with the Apple or Android app. If you’ve got another brand of smartphone OS or they one day go out of business it might become useless. There has been some reverse engineering and a Windows application is available, but this comes with the usual caveats that apply to an unofficial homebrew workaround.

If you’re happy to accept the slightly wonky app and some unreliability, the Orvibo S20 is a pleasingly inexpensive introduction to smart home technology. However if your requirements are more advanced or you’re hoping to make it part of a wider smart home setup you may find its limitations aren’t worth the low cost and it might be better instead to look at the alternatives from bigger names like Belkin and D-Link.