Do you know your FTTP from your FTTC? Fibre broadband connections are increasingly common in our homes, but not every fibre broadband service is equal and there’s been controversy over the use of the term “fibre”, with some saying that providers shouldn’t be allowed to use it for anything but a full fibre broadband link.

But how much do broadband users know about this, and do they think it matters? We set out to find out more in a recent survey.

When is fibre not fibre?

The disagreement over terminology comes because the industry commonly refers to a Fibre To The Cabinet (FTTC) or Hybrid Fibre Coaxial (HFC) service as fibre optic broadband.

With these types of hybrid or “part-fibre” connections the fibre optic lines don’t run all the way into our homes. Instead the network link is completed with either a copper telephone line (FTTC, from providers such as BT, Sky, TalkTalk and almost all others) or coaxial cable (HFC, used by Virgin Media).

If you currently have fibre optic broadband you almost certainly have either an FTTC or HFC connection.

In our survey of 1,500 UK broadband users, 50% said they had fibre broadband (and that figure is likely higher as 19% said they didn’t know), which is in line with data released by BDUK last year that pegged superfast (24Mbps+) adoption above 50% in many areas. 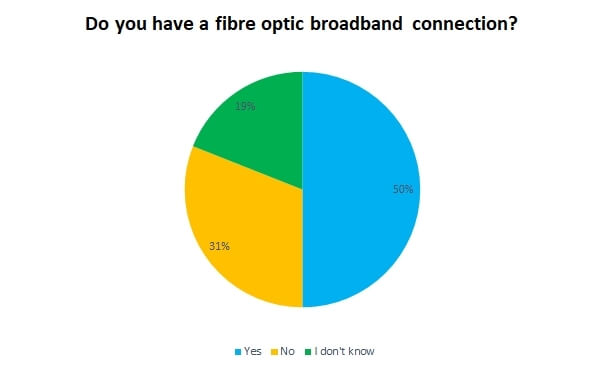 However, we also find that 58% didn’t know that fibre broadband can also refer to a broadband service that utilises copper or coaxial lines. And just 19% were aware that only 5% of premises currently have access to a true full fibre service (commonly known as FTTP or FTTH - Fibre To The Premises / Home) where the connection is fibre all the way into buildings. 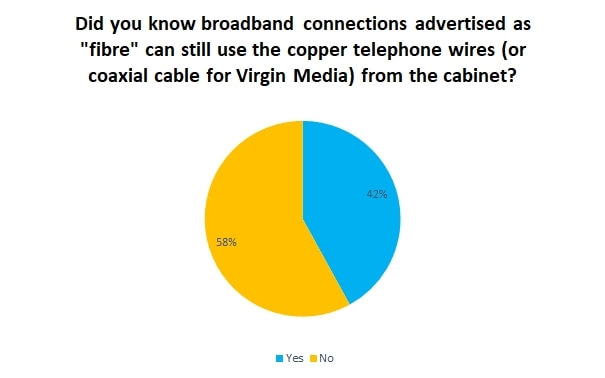 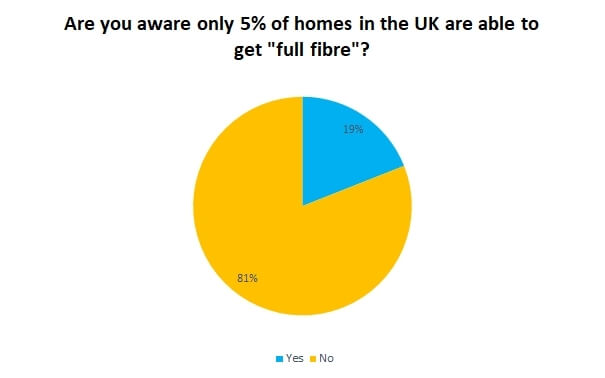 Those opposed to the liberal use of fibre in the UK broadband industry see this as misleading, and argue that advertising should be clear on the difference between FTTC and FTTP.

This isn't a petty squabble over initialisms that many consumers won’t recognise, it is a genuine issue for the fibre network operators which are working to expand FTTP coverage around the UK and who face direct competition from established providers.

Full fibre is reliable and future-proof connectivity that can deliver extremely high speeds. But it is expensive to install and operators such as Hyperoptic and CityFibre feel it’s unfair that other providers don’t have to highlight the differences.

Commenting on our survey, Hyperoptic MD Charles Davies said: “The Government has set out its ambition for a nationwide full-fibre broadband network by 2033. Advertising rules need to keep pace and support this shift to Gigabit Britain and help inform consumers of the differences. Full fibre broadband providers, like Hyperoptic, cannot differentiate their services when ‘fibre’ terminology is applied too generically, with part fibre services appearing to consumers to be the same as full fibre connections."

In our polling we found that 81% of respondents agreed that fibre optic should only be used to advertise full fibre connectivity. 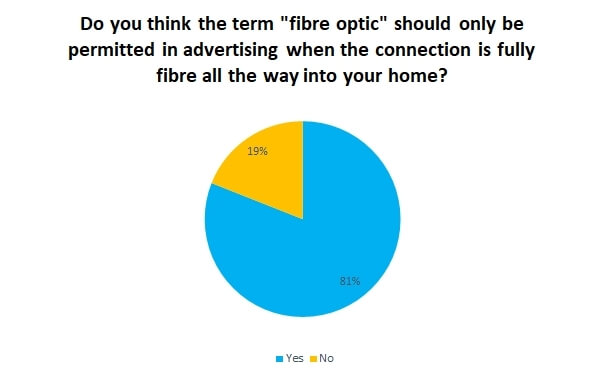 So far those in charge of regulating the market don’t agree. In 2017 the ASA examined the use of fibre in the context of broadband advertising and concluded that consumers were not misled. But following this decision FTTP operator CityFibre filed for a judicial review to challenge the ASA’s conclusion, which is currently pending.

Although FTTP coverage is only a meagre 5% right now, this will be growing and hopefully - in the not too distant future - more of us should have the option to take a high speed gigabit connection. When this happens it may be necessary to force a change in advertising so that broadband consumers know exactly what they’re paying for.

Matthew Evans, Chief Executive at Broadband Stakeholder Group said: “Educating consumers about what gigabit capable networks will deliver to them is important in helping to drive that take-up. Whether that revolves around the word ‘fibre’ in advertising is still the subject of much debate between industry players and the ASA. However, there is clearly more that needs to be done to make sure consumers understand what technology will deliver for them – and that needs to include more information than just price and speed, as well as emphasising that it will help to future proof their connection.”