Discover all about Sky TV bundles

This number will put you through directly to Sky's customer service team.
For more information please see our privacy policy.

What is a Sky TV package?

Sky TV is a television service which uses satellites to transmit programming to dishes on the ground. It provides high quality picture and sound, a huge number of channels and does not rely on fixed lines so it can be installed on any property within the satellite’s coverage area - which is the whole of the UK and Ireland and some parts of Europe.

In addition to its premium satellite TV packages, Sky also has its own broadband services, which can be purchased separately or as part of a “triple play” bundle with TV and phone.

Read on for more info, but if you're looking to buy you can visit Sky by clicking below:

What channels are available on Sky TV?

With a Sky TV deal you can get access to an incredible number of channels. There are more than 700 TV and radio broadcasts in total, covering everything from news and sports to general entertainment and hobbies. We’re not going to list every single one of them, but here’s just a selection of some of the most popular…

The selection of channels you receive will vary depending on which type of Sky TV package is selected. For example, the Sky TV Entertainment Pack provides channels such as Comedy Central, SyFy and Sky Atlantic, while Entertainment Extra unlocks channels such as Eurosport, National Geographic and many of the “+1” services. Take this into account when choosing your Sky TV deal so you get access to all the channels you want, but don’t worry if you’re missing something: TV packs can be added (and removed) at any time without extra cost or worrying about contract terms.

You also get access to Freeview channels, which of course includes BBC1, BBC2, ITV, Channel 4 and Channel 5 as well as other popular channels such as Dave, Challenge, Film4 and E4.

Every Sky TV bundle includes a Sky TV set top box. This is not just used to receive the satellite TV signal - it also provides you with live pause and rewind features, catch-up and on-demand streaming and, most usefully, a hard drive to record shows. Recording can be done with the push of a button, and you can set it up to automatically record entire series.

If you’ve used Sky TV in the past you may be familiar with the old Sky+ boxes. These have now been replaced by a brand new device: Sky Q. This slick new box offers the same smart functionality as Sky+, plus some great new features… 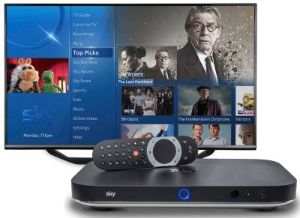 High capacity storage
Sky Q is available with either a 1TB or 2TB hard drive for storing hundreds or thousands of hours of content.

Multiroom
Sky has had multiroom for many years, but the new Sky Q system is a vast improvement. First off, all the multiroom boxes are wireless and don’t need to be connected to the dish. But they also act as Wi-Fi hotspots for your Sky Broadband, extending network coverage around the home.

View recordings on a tablet
Sky Q recordings can be synced to an iPad or Android tablet for viewing outside the home.

If you’re only interested in the TV services, you can pick up a Sky TV only package with your favourite channel bundles; you don’t need to be a Sky Broadband customer (though you’ll want some kind of broadband service to get the most out of it, and a phone line is required).

However, going for a “triple play” bundle with broadband, phone and TV is a fantastic way to get all your entertainment needs covered under one bill. And it can often save money over using separate providers, although do bear in mind there will probably be a setup free as Sky don't tend to offer free-setup deals.

You don’t miss out on any features with one of these. Sky TV triple play packages are available with the same broadband speeds - cheap ADSL up to 17Mb and fibre up to 38Mb or 76Mb - and a phone line with optional inclusive calls, plus your choice of Sky TV channel packages.

When signing up to Sky TV as a new customer you may get the opportunity to take advantage of some freebies or special offers. There are often limited-time Sky TV offers which can provide welcome extras or save you money.

Shopping vouchers are a favourite, giving you some money to spend in shops in return for signing up for a Sky TV bundle. The vouchers may be for a specific store, such as Tesco or M&S, but sometimes there’s the option of a pre-pay credit card too. You might also get to enjoy discounted pricing for some portion of the contract term, or perhaps the entire year.

In addition to limited special offers there are extras that every Sky customer gets. Sky TV bundles always include a Sky TV box, though be aware that setup and installation fees may apply and you might have to pay more for the cutting edge hardware. There’s also free catch-up TV access - in addition to the likes of iPlayer and All4 your Sky box allows you to view shows from other Sky channels from the last 30 days. And when you’re away from home the free Sky Go app can be used to view many shows on mobile or tablet.

How do I get Sky? Comparing and buying Sky TV packages

So you like the sound of a Sky TV bundle and are ready to sign up...but which Sky TV package is right for you?

Consider which of the Sky TV bundles is the best fit for you, look at the selection of channels and consider whether you’re getting everything you want from it, or whether you’re going to end up paying for a lot of channels you’ll never watch. This is particularly important when it comes to the premium movie and sports channel packages. These offer a lot of entertainment, but will have a noticeable impact on the monthly price.

Remember that whichever package you choose you will need to sign up for at least 12 months, and early cancellation will mean paying a fee. If that’s not convenient you may need to look at other options, such as Sky without a satellite dish (see below).

Follow the steps with Sky to register and purchase your package. Once the registration is complete it’s down to Sky to send over an engineer - they’ll arrange a date to come and fit your satellite dish. In the meantime your Sky TV box (and Sky Hub router, if you got broadband) will be posted out, ready to receive a signal.

Can I get Sky TV without the satellite dish?

If you want access to Sky TV services but can’t get a satellite dish, or would rather avoid lengthy contract agreements, there are some alternatives. 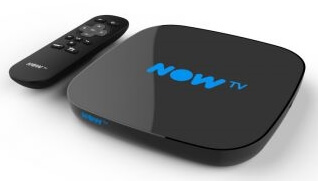 NOW TV is a relatively new venture from Sky which offers very affordable access to much of what Sky TV has to offer. Using an inexpensive TV box you can stream content from both free catch-up services and premium Sky channels, with the ability to add entertainment, movie, sports and kids TV packages for a simple monthly fee without any long term agreements.

Many of Sky’s own channels - such as Sky Movies and Sky Sports - are also available on other TV services and devices. Virgin Media, BT TV and TalkTalk TV customers can all get access to some Sky channels. Additionally, you can download the NOW TV app for smartphones, tablets and streaming devices such as Roku.

None of these options offers the same breadth of channels as a proper Sky TV package, and you don’t get to enjoy the features of the Sky TV box, but they can be an affordable and flexible way to get access to some of the most popular shows.