Broadband & next gen consoles: what internet speed do you need for PlayStation 5 & Xbox Series X? 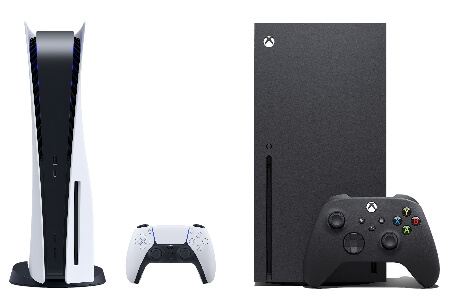 The next generation of games consoles has arrived, with the Sony Playstation 4 and Microsoft Xbox One being replaced by the Playstation 5 and Xbox Series X and Series S.

Boasting powerful hardware with support for high-definition 4K TVs, these are the fastest gaming consoles ever made.

But a 4K TV isn’t the only thing you’ll want, because these consoles are more reliant on internet access than ever before. To get the most out of them, you’ll need to ensure your broadband speed and Wi-Fi router is up to the job.

Looking to get a new broadband deal for your new console right now? As a minimum, we recommend an unlimited fibre optic broadband service with a speed of 30Mb+ for the PlayStation 5, Xbox Series S, and Xbox Series X. But ideally, you should aim for 50Mb-100Mb.

Here are just a couple of the best fast broadband deals available today:

Check out our full range of fibre optic broadband offers to see what else you could get.

To learn more about how to choose broadband for a next gen console, and why it’s important, read on below.

Long gone are the days when buying a game means scouring the shelves of your local store to discover new releases. You can now browse an online catalogue (Playstation Now for the PS5, Microsoft Store for the Xbox) and download everything to the console's hard drive without touching a box or discs. There are even versions of both consoles without a disc drive, so downloads are the only way to install games.

Boxed games are still around, but they’re becoming less relevant; many games never get released on disc, and even when there is a physical copy you may still have to download additional data before playing. And it’s standard for games to receive post-release patches and updates which fix bugs and add new content.

This is all very convenient, but the sheer size of games now means that downloading can take a very long time if your broadband isn’t up to scratch. Even a bug-fixing patch can take hours on a slow broadband connection.

Online multiplayer is also a huge component of many games, if not the sole focus. The good news here is that online games don’t place the same demand on a connection as downloading large files and you can get away with slower broadband. But you’ll still want to aim for a decent minimum speed for the best experience. You also have to consider that other devices and users in your home sharing the connection will all impact overall performance.

There are two different models of Playstation 5. They have the same basic hardware and the same performance, but the Digital Edition does not have a disc drive.

That means that broadband speed is even more important for Digital Edition owners because games can only be installed by downloading.

Microsoft has also chosen to launch slightly different versions of its new Xbox. Like the PS5 Digital Edition, the Xbox Series S lacks a disc drive, so fast broadband is essential.

However, the Series S is also slightly slower than the Series X, which means games cannot run as fast or support the same resolution as the more powerful Series X. Some games do have a slightly smaller download size as a result, but it’s not a huge difference, and fast fibre broadband is still recommended.

How long does it take to download games for the PS5 and Xbox Series X & S?

The table below shows the estimated time (rounded to the nearest hour) it could take to download games for the PS5 and Xbox Series X/S at various speeds.

It’s important to note that this assumes you are receiving the full possible transfer rate at all times, but it is unlikely to work that way. In practice, the speed will fluctuate and increase the time it takes to finish.

With big releases now often exceeding 100GB in size, you can see that on slower broadband connections it can take a very long time indeed to get hold of a new game. And while that download is in progress, it’s going to use up all available bandwidth and slow down anything else you might be doing with the broadband.

What broadband speed do I need for the Playstation 5 and Xbox Series X and Series S?

We recommend the following broadband speeds for owners of the next generation games consoles.

Minimum speed: 30Mb
A speed of at least 30Mb will be fast enough that you can download games in a reasonable amount of time, though you’ll still be waiting a good few hours for some of the bigger games. It’s plenty of speed for playing online games, too.

However, you must consider the number of people sharing the connection because it will feel slow if shared between more than one or two users (especially if everyone wants to use their own games console).

This is available to more than 95% of the UK using fibre optic broadband on the BT Openreach telephone network. You’ll find lots of great value deals offering an average speed of around 35Mb, with plenty of options starting at under £30 per month, so it doesn’t need to be expensive.

Recommended speed: 50Mb-100Mb
If available in your area, a faster fibre optic package is a worthwhile investment for gamers. It’ll significantly cut download times and offer more bandwidth headroom when sharing the broadband.

Average speeds of around 65Mb are available many homes using a regular BT telephone line, while Virgin Media’s cheapest deals offer an average 54Mb or 108Mb.

Nice to have, but not essential: 100Mb+
While not everyone has this option, an increasing number of homes have access to broadband speeds well above 100Mb. Virgin Media offers up to 516Mb and is soon going to deploy a rapid 1Gb service. Upgrades to the BT network are also introducing new services with speeds of 145Mb or 300Mb.

100Mb+ broadband will make short work of even the biggest downloads, and easily cope with the demands of a shared home. But you’ll have to pay more to get it.

Whichever broadband you choose, make sure it is unlimited. The sheer size of game downloads means you’ll quickly exceed a data cap. Almost all providers offer unlimited broadband deals, and they’re cheap, so you’re not going to save a significant amount by opting for a limited service.

In most cases, there will be no pressing need to upgrade your Wi-Fi router for the Xbox Series X/S or the PS5. The free router you get from your ISP should be all that’s required unless it’s ancient.

All the new consoles support gigabit ethernet (which is back-compatible with the older 100Mb standard), so you can connect them to the router with a network cable. This will provide the fastest and most reliable internet service. Any router will support at least two wired network connections, though most provide four and some higher-end models offer even more than that.

But a cable is not necessary as Wi-Fi is also supported without any additional hardware. All the consoles are compatible with Wi-Fi 5 (802.11ac) as well as the older 802.11b/g/n.

Don’t get too bogged down in the technical details; if you’d like to learn more, our introduction to Wi-Fi explains what this technojargon means, but all you really need to know is that any router made in the last decade or so is compatible.

At a minimum, check that your router supports 802.11n Wi-Fi. If it does not, that would indicate it is very old and upgrading would be worthwhile to get better Wi-Fi speed. There could be security issues with older hardware, too.

Our recommended Wi-Fi router specification for the PS5 and Xbox Series X/S is 802.11ac Wi-Fi and gigabit ethernet. Any fibre optic broadband deal purchased in the last year or two should meet this standard.

The Playstation 5 does support the latest Wi-Fi 6 (802.11ax) standard, but very few routers currently offer this feature. If you are buying your own router and looking to get more advanced and somewhat future-proof networking hardware, then 802.11ax should be on the shopping list,  but you won’t see any significant benefit over 802.11ac for gaming.