We found 77 deals for you in

If you're hunting for broadband in London, let Broadband Genie help. Just enter your postcode to compare the best internet deals in the capital, from all the UK's top providers - plus we have a host of plain English and independent expert guides.

Currently showing 10 of 77 deals which match your search

What is a sponsored deal?

Sponsored deals are packages which are either recommended by Broadband Genie or paid for by a provider.

Currently showing 10 of 77 deals which match your search

Broadband in London - what are your internet options? 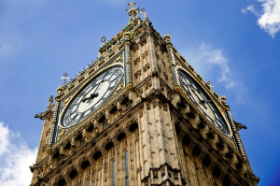 There is still a surprisingly large number of places in the UK which remain poorly served by broadband providers. Rural areas, in particular, may not get anything better than 8Mb ADSL and some are still stuck on dial-up. Even a few bigger towns have a limited choice of connectivity.

But this doesn’t apply to London broadband! Being in the capital means you likely have access to many providers with various speeds and types of internet connection, allowing you to select the perfect broadband at the right price. You should access to a wide variety of money-saving options, whether these be vouchers, free gifts or free installation.

Standard ADSL should be available anywhere in the London area. ADSL2+ is now widespread and provides average speeds around 10Mb. This is perfectly adequate for almost anything you might care to do online, including streaming video or music, web browsing, email and online gaming.

>ADSL is also the cheapest service for broadband. You’ll find that by spending a little time comparing deals it is very easy to get internet for less than £20 per month.

The main area where ADSL’s slow speeds become an issue is for downloading and uploading large files, especially for uploading as it's restricted to a maximum of 1Mb .

ADSL is a good choice for light usage or individuals who won’t be requiring a great deal of bandwidth, but as you start to do more online or share the connection with others in your household you may find it a little too restrictive. However, most ADSL deals are still unlimited, so you won't have to worry about your usage being capped at least!

The FTTC (fibre to the cabinet) broadband being installed throughout the UK by BT eliminates the old copper lines for all but the last run into your home, providing average speeds of up to 63-68Mb down and around 20Mb up - a huge improvement in comparison to ADSL.

Fibre broadband’s reach is now much improved so many areas should have access to fibre with an average speed of around 35Mb or 65Mb. And with the increasing amount of competition in the market, prices are actually falling close to ADSL. Fibre is now available from many of the major broadband providers, including Plusnet, Sky and TalkTalk, as well as BT. It is a relatively inexpensive superfast option.

And of course, those speeds are far better for big file downloads, high definition video streaming and lag-free online gaming. It’s particularly useful if you’re sharing the connection with multiple users and devices.

Virgin Media broadband offers what is currently the fastest mass-market broadband in the country. Their top service rockets along at an average 518Mb.

Virgin users also benefit from a wide variety of ‘triple play’ offers with phone and TV to go alongside the broadband, including the excellent TiVo box which remains a Virgin exclusive in this country. Virgin does also offer broadband only deals, although bundles often work out best value overall.

The top-end packages aren’t cheap, but with the rapid connection speeds and an enormous selection of TV channels, you do get a lot for the money.

There is a catch, though. Virgin Media installs and operates its own fibre network and while they do cover around 60% of the population it is still not uncommon to find areas where there’s no availability. In many parts of London, this should not be an issue, particularly in newer blocks of flats where cable is often installed during construction, however, you may discover that it just is not fitted in your street even if you live right near a location served by Virgin.

The postcode lottery - how to find the best broadband in London

While the internet services we’ve listed above will typically be available in many parts of London, this does not mean you can definitely get them in your home.

In order to receive ADSL2+ or fibre optic broadband, these services must be installed in your local exchange. In a busy urban area, this is rarely an issue, but if you happen to be on an exchange which has not been enabled yet you’ll find your choice is more limited.

Also, remember that the speed of ADSL internet is greatly affected by the distance to your exchange - if you’re miles away you won’t hit the top speeds.

And as mentioned, Virgin Media fibre is only available in the areas where Virgin has installed lines. This may not be an issue in many places across London, but there can still be ‘not-spots’ in between.

When you compare internet services in London be sure to use our postcode search feature. Simply tap in your postcode and our system will automatically filter out the options according to the availability at your exchange. You will still need to confirm availability and speed with the ISP before you buy, however using this search function should stop you wasting too much time looking at providers which aren’t available at your home.