BT Broadband vs Virgin Media Broadband: which is best? 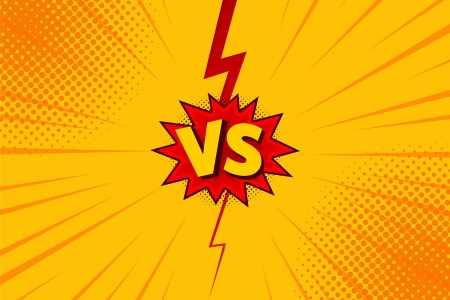 BT and Virgin Media are behemoths of the broadband world. Not just two of the biggest providers for home internet, TV, and phone services; they also operate the two largest fixed-line broadband networks in the UK.

At a glance, each appears to offer a similar range of services. But there are some big differences between these giants. So if you’re choosing between the two, how do you know which is best?

Read on to find out!

Most of the time, when we’re comparing broadband providers, there isn’t a great deal of difference between the services they offer. That’s because the majority of Internet Service Providers (ISPs) use the Openreach (BT line) network, and so you’ll find a broadly similar choice of packages and speeds.

But Virgin Media operates its own network, and it doesn’t share. When you’re looking at Virgin Media vs BT - or any other ISP that uses the BT Openreach infrastructure - you’ll find a pronounced difference between the two.

Below, we’ve compared the cheapest and fastest deals for both providers, but this doesn’t tell the whole story. Availability is a big factor for Virgin Media, as not everyone can get its services. So you might want to skip down to the section on coverage to check what’s on offer in your area, before delving into the question of price and speed.

BT takes the lead on price, with the cheapest BT Broadband and Fibre Essential packages (both cost the same) coming in a couple of quid less than Virgin. And you’ll find it frequently includes a BT reward card offer, too. So if your goal is to simply spend as little as possible, BT has the edge here.

However, in terms of value for money, Virgin’s M50 package is compelling. For just a small difference in the price, you get a significantly quicker download speed. Virgin also has a slightly shorter contract term, which provides a little more flexibility when it comes to managing your bills and keeping costs as low as possible.

Virgin’s M500 package offers a blisteringly quick 516Mb average download speed. It’s not too expensive, either. However, it is disappointing that you only get a relatively meagre 36Mb upload speed which isn’t that much faster than BT Fibre 2, considering the massive difference in download rates.

BT Fibre 2 is the quickest BT deal most of us can get right now, and it offers roughly the same top speed as other providers using the Openreach network. If you rule out Virgin Media as an option, then it is worth comparing BT against other Openreach providers, as there are cheaper packages available which deliver the same performance.

We should note that our comparison only takes into account the packages that we offer, and which are widely available. BT does have much faster Ultrafast and Fibre To The Premises (FTTP) broadband which are a close competitor to Virgin, but at the time of writing these have very limited availability. Virgin has also started offering gigabit broadband in a few locations, but at present, it’s not something most people can get.

Price and affordability: which is the cheapest, BT or Virgin Media?

BT deals start from around £25 per month for an ADSL or entry-level fibre service. Faster fibre deals start at about £27 and top out around £30. Choosing a TV bundle will bump the cost up by around £10+, depending on additional channel packs.

Virgin’s cheapest package starts at around £28, up to approximately £50 for the very high-speed fibre connections. But as mentioned above, it can provide a much faster service. Virgin Media TV bundles do get quite expensive if you have very fast broadband and lots of premium movie and sports channels. Though a basic bundle is available for about £30, and Virgin TV can provide a massive amount of both live and on-demand content.

Virgin does occasionally offer free setup deals, but you’ll need to keep an eye on the special offers as this doesn’t tend to be available for long.

It’s rare that BT isn’t offering a free gift, usually a BT Reward Card (a prepaid credit card loaded with cash). They’re often quite generous too, so this can add up to a significant saving.

Virgin Media rewards are less common. Often they’ll include free Amazon vouchers (usually as part of a Broadband Genie exclusive), but we have in the past seen free Virgin wine gifts and free gadgets. Virgin may also offer free set up.

BT uses the Openreach telephone network, so just about everyone can get some kind of BT Broadband deal, even if it’s just ADSL (though most homes can now get fibre optic).

The Virgin Media network is separate, and entirely owned and operated by Virgin. While the advantage is that it can deliver much faster speeds, it does mean that fewer homes have access to a Virgin line.

When buying broadband, your first step is always to find out what’s available, which you can do right now by entering a postcode below:

Once you’ve entered your postcode, you’ll only see deals available to that address. We partner with Thinkbroadband to bring you the most accurate information possible (see our privacy policy for further details).

In our Home Broadband Survey, neither BT nor Virgin Media scored particularly well for customer service; BT had a rating of 75%, while Virgin Media was only slightly behind with 74%; both scores were below average in this category.

If customer service is a concern, check out our survey results to see which providers had the best scores in this area. In general, you will find that smaller and more specialist providers have a better reputation.

Virgin Media and BT are both able to offer deals with a full range of additional services. But Virgin has the advantage here thanks to its massive entertainment bundles and greater flexibility with regards to phone services.

Home phone: All BT packages - save for its FTTP services - require an active phone line, and the prices you see in our deals includes line rental. You can get BT Broadband without inclusive calls, but if you do use the phone regularly, there are a variety of inclusive calling bundles including unlimited UK landline and mobile calling, and free international calls.

Virgin Media does not require a phone line and is one of the few providers who can deliver broadband without a phone. If you do need a phone, you’ll find a similar selection of inclusive calling bundles (you can also opt to take the phone line only and just pay for what you use at a standard rate).

TV: Virgin Media TV is a leading premium entertainment provider. Its action-packed bundles can deliver hundreds of channels encompassing everything from the latest US TV shows and blockbuster movies to more niche interests. You also get access to a vast library of on-demand content, and a Virgin TV box with enough storage space for hundreds of hours of recordings.

BT TV can’t match Virgin in terms of the sheer breadth and depth of content. However, it can be quite a lot cheaper and may still offer everything you’ll need. The basic bundle offers Freeview plus a few extras for a very low cost, or you can add some premium movie, sports, and entertainment bundles that contain a selection of the most popular channels.

Mobile: Virgin and BT both offer mobile phone packages, with a variety of tariffs (including SIM-only plans) and bonuses for broadband customers. Both also use the EE network (which is owned by BT), so in terms of coverage and speeds, there’s no difference between them. BT Broadband customers benefit from a £5 discount on any tariff, while Virgin Media TV, fibre, or phone customers can get exclusive unlimited data and texts mobile plans.

BT and Virgin are pretty equal when it comes to the free extras. Arguably the most valuable freebie is free Wi-Fi hotspot access, and each boasts millions of access points. However, Virgin’s Wi-Fi presence across London rail and underground stations is potentially very useful if you live or regularly travel in the area.

BT vs Virgin: which is best?

Between these two, our top pick would be Virgin Media, primarily because of its excellent speeds, TV bundles, and broadband only deals.

However, it’s not necessarily as simple as that. For one thing, these ISPs are evenly matched in terms of what they can provide; broadband speed aside, they offer a very similar selection of services.

And, crucially, when it comes to choosing between BT and Virgin Media, the major deciding factor is availability. If you are in a Virgin network area, then Virgin can probably offer the best speeds of any ISP, plus great TV bundles, and broadband without a phone line. Unless you’re in the small minority of homes covered by BT FTTP services, it can’t touch Virgin for performance.

If it turns out you can’t get Virgin Media, the decision then comes down to whether BT offers the best value package among the vast array of Openreach network providers.

But, you will pay more for Virgin deals. If the price is a big concern, then BT is almost certainly going to be cheaper, especially for TV and broadband bundles.