What is wireless broadband? Wireless internet and Wi-Fi explained 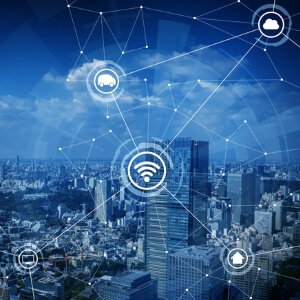 Wireless broadband is an internet connection that doesn't use cables. Sounds simple enough, but to confuse matters the term can be used to refer to either home Wi-Fi networks, or the broadband service itself.

Is wireless broadband the same as Wi-Fi?

When we talk about wireless broadband it can mean two different things.

Wi-Fi networking is the tech wizardry which lets us get internet access or share files without running cables around our home.

Wireless broadband can be a way for internet service providers (ISPs) to deliver internet access without having a line connected to your home. That can be useful if you live in an area without fixed-line broadband, or you want internet without a phone line.

When we use the term wireless broadband it is often referring to Wi-Fi networks, where a Wi-Fi router is used to provide internet and local network access to nearby devices without the use of wires.

Almost all broadband deals include a free Wi-Fi router so you probably already have Wi-Fi in your home. And there are also thousands of public Wi-Fi hotspots found in restaurants, pubs, and other locations around the UK which you can often use for free internet access.

But the broadband connection itself is probably not wireless and is most likely supplied via an Openreach (BT) telephone line or Virgin Media network cable.

To learn more about Wi-Fi and how to use it we have a comprehensive guide to Wi-Fi which goes into a lot more detail.

In order to use Wi-Fi at home, you will need a Wi-Fi router. This not only acts as a gateway to the internet but also hosts a local network and broadcasts a wireless network signal which any compatible (and authorised) device can use to access the broadband or share data over the network.

While you can buy your own Wi-Fi router, they are usually included for free with a new broadband deal.

Wi-Fi is enormously helpful in many scenarios as it’s so easy to set up and use, and means we can get internet without having cables running everywhere. But there are some downsides too.

Wireless broadband may also be used to refer to wireless ISPs (WISPs) which deliver internet access with a wireless connection instead of a fixed-line.

The name wireless broadband does not refer to a specific technology as WISPs can use different methods to provide their services.

If you’re interested in getting internet from a WISP you might encounter terms like FWA, mobile broadband or satellite broadband. But what do these mean in the context of home broadband, and what are the differences between them?

Fixed Wireless Access ISPs use wireless transmissions to provide internet access without having to install cabling. FWA is a broad term, not a specific technology; FWA ISPs may use various methods including Wi-Fi, WiMAX (a long-range wireless standard), and 4G or 5G to deliver the connection.

A public Wi-Fi hotspot is a Wi-Fi router offering internet access to anyone in the vicinity. Often these are free services operated by businesses and public organisations for the benefit of customers, though there are also Wi-Fi hotspots which require payment to access.

Unlike FWA, a public hotspot is not set up to deliver internet access over a wide area. It often uses the same kind of hardware as a regular home Wi-Fi router and is only meant to communicate over short distances.

Mobile broadband can be used at home in place of a fixed-line service. Any mobile broadband service would work so long as you have a strong signal but the relatively low data limits of many packages can be restrictive, so if you plan to do this you should choose a package which has been designed for home use. If you’d like to know more read our guide to using mobile broadband at home.

While the use of mobile broadband at home is not very common right now, we may see this become far more popular in the near future as 5G mobile internet can be faster than many home broadband services.

Rather than relying upon terrestrial transmitters, satellite broadband uses orbiting relays to provide broadband access via dishes on the ground.

Satellite broadband’s greatest strength is its ability to work anywhere within the very large coverage footprint, so even the most remote homes can get reasonably fast internet. If this is something that interests you, we have a guide to satellite broadband which goes into more detail.

Should I get fixed-line or wireless broadband?

Fixed-line broadband using ADSL or fibre optic technology from ISPs such as BT, TalkTalk, Virgin, and Sky is the best option for most people. These are reliable, affordable, and often unlimited, services that almost everyone can get.

Wireless broadband ISPs tend to fill a niche, covering gaps in the fixed-line networks. If you find that normal broadband access is very slow or non-existent then a WISP may be the ideal solution.

There are few reasons to choose wireless over fixed-line if both are available. A WISP does have the advantage of not needing a telephone line or cable so may be preferable if you can’t get or don’t want a phone line. But consider the cost implications as installation, setup, and running costs may be higher than the price of fixed-line broadband, even including phone line rental.