BritBox, a streaming service from the BBC and ITV, has today launched in the UK, aiming to rival the established players in the market such as Netflix, Amazon Prime and NOWTV.

BritBox Viewers can enjoy shows from the BBC and ITV for a £5.99 per month (with a 30-day free trial option). Content from Channel 4 and Channel 5 will be added next year.

The service, which launched in America back in 2017 with a reported 650,000 subscribers, will predominantly feature much-loved British series including Only Fools and Horses, Top Gear, and Gavin and Stacey.

BT has partnered with BritBox to free access to EE Mobile customers and BT TV subscribers.

BritBox will have to operate alongside the BBC iPlayer and the ITV hub, with no clear unique selling point for now, as the majority of the current roster of shows are available for free elsewhere. However, the service will eventually hold exclusive rights to most shows and also plans to produce its own original series.

Earlier this year, we examined whether the streaming market is at a critical point due to the flood of new services coming online, particularly with the release of major streaming offerings from Apple and Disney. Consumers are being asked to pay for multiple subscriptions to gain access to content, which risks backfiring on the networks and production companies investing heavily in the hopes they can make the next Netflix.

We surveyed 1,500 Broadband Genie visitors and discovered that streaming customers could turn towards piracy to avoid having to pay for a number of different services. In the same survey, we found fewer than 1% of respondents were planning to sign up to BritBox, though 11% expressed some interest in purchasing the service. 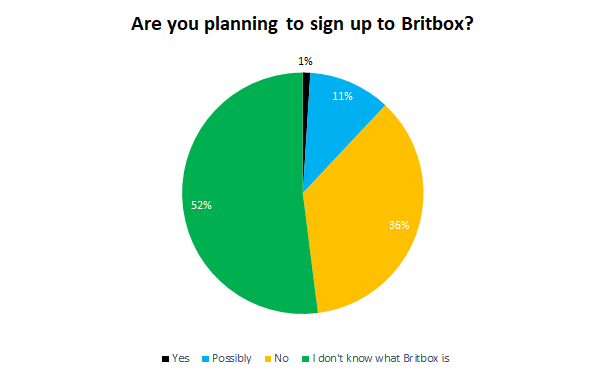