What is gigabit broadband? 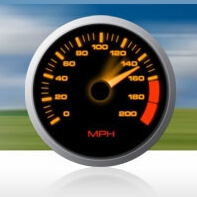 Chances are your current home broadband service is either ADSL or fibre optic from the BT Openreach or Virgin Media networks. That means you probably have an average download rate of around 10Mb for ADSL, 35Mb or 65Mb for Openreach, and up to 500Mb for Virgin Media.

Is that fast enough for you? Many of us would jump on the opportunity to sign up to a quicker service, and soon, we may well have the option to enjoy an incredible boost in performance thanks to the deployment of ultrafast gigabit broadband connections.

If you're after the fastest broadband possible, then a gigabit broadband service is the way to go. It provides an enormous amount of bandwidth that's enough to handle anything a home user could throw at it, as well as capably serving the needs of small and medium businesses.

What is gigabit broadband?

Gigabit broadband is an internet connection that offers a speed of 1 gigabit per second (1Gbps/1Gb) or more.

With a speed of 1Gb, you could potentially download a 5GB file in just 40 seconds.

At present, these incredible speeds are only achievable with a fixed-line connection. 5G is also theoretically capable of providing gigabit broadband, but it'll be a while before we get that kind of performance in practical day-to-day usage.

Most gigabit broadband uses fibre optic lines, but it's different from the fibre you may already have. The fibre broadband provided by home ISPs such as BT, Sky, TalkTalk, and Plusnet use Fibre To The Cabinet (FTTC) technology, which means that the fibre connection runs to roadside cabinets and the final step into homes uses the regular telephone line.

To enable gigabit broadband, providers are gradually installing another type of fibre technology: Fibre To The Premises (FTTP, or FTTH - Fibre To The Home).

With FTTP, fibre lines run all the way into your home and connect directly to the router. Such a 'full-fibre' solution is capable of much quicker speeds when it's not hindered by the old telephone network.

As for Virgin Media, that network uses a similar technology called Hybrid Fibre Coaxial which runs on fibre to the cabinet but then relies on coaxial cable instead of telephone lines to reach into homes (hence why it used to be known as cable broadband).

While most Virgin connections have a maximum average speed of 516Mb right now, Virgin is upgrading its network (using the DOCSIS 3.1 standard) to achieve gigabit speeds. Virgin's Gig1 packages have fairly limited availability at present, but it won't be too long before this service becomes commonplace.

What is gigabit broadband used for?

The same thing as any other broadband service, only faster!

Not many of us could claim we need gigabit broadband, but the additional speed is definitely useful for some situations.

Any really demanding tasks like transferring large files or streaming HD video are painless with gigabit internet. Big files can download or upload in moments so it would certainly be a lot less hassle to transfer lots of data.

If your connection is shared between many people or you've got a large number of net-connected devices in your home, then a gigabit service should mean there'll always be more than enough bandwidth for everyone and everything, even if you're all streaming HD video and downloading huge files at the same time.

For the more technically inclined it's also an exciting prospect for operating servers from home, such as multiplayer gaming, media streaming or web sites (though if this is what you're planning, check the ISP's terms and conditions to ensure such activities are permitted).

While gigabit broadband might be overkill for a typical home user, there are plenty of businesses that would be well served by such a speedy connection, not just for file transfers but VOIP and video calls and handling the needs of multiple users.

At present internet access for small and medium businesses may be limited to consumer-level services using ADSL or fibre, which can be a hindrance with even just a few employees. Upgrading to a quicker connection is often possible but can be very expensive because if the infrastructure isn't in place you'll have to foot the bill for installation. You could theoretically get a gigabit leased line right now, but the cost of such an endeavour is high.

Affordable and widespread gigabit broadband would allow small businesses and sole traders to take advantage of the faster speeds.

How to get gigabit broadband

So you fancy getting your home hooked up with gigabit broadband?

Unfortunately, the situation right now is that while there are some ISPs offering gigabit in the UK, they operate in very limited areas. Though if you're lucky enough to be within the coverage zones, you may be pleasantly surprised by the relatively affordable cost.

Hyperoptic is a pure fibre provider that focuses on new blocks of flats. They started out providing internet in London but are expanding to Sheffield, Newcastle, Birmingham and Nottingham. At £60 per month for unlimited 1Gb fibre, it's a very affordable option if you can get it. Hyperoptic also offers 500Mb, 150Mb, and 50Mb internet packages, and there's a standard £40 connection fee on all tiers.

TalkTalk has launched its own gigabit broadband service, dubbed UFO - ultrafibreoptic. This is only available in parts of York right now, but if you can get this service the very low cost is extremely attractive - it is the same price as their regular home broadband, making it by far the cheapest ultrafast broadband in the UK.

Virgin Media is also rolling out gigabit fibre internet, and it's currently available in Birmingham, Coventry, Manchester, Reading, and Southampton.

But gigabit broadband isn't just for big towns and cities. Around Hull, KC Communications has deployed gigabit connections to rural communities which previously had very poor services. Another effort at improving rural connectivity is Gigaclear, which allows remote villages to get hooked up to gigabit fibre at a relatively affordable cost.

In the near future, we're likely to see a much wider choice when it comes to gigabit broadband, and it might not be too long before there are competing networks.

For now though the best solution for the vast majority of is going to be the fibre currently offered by either a BT network provider or Virgin Media.

Here are just a few of the fastest deals currently available:

You can see what else is on offer in your area by using our free postcode checker: