Broadband Genie has been helping people get cheaper, better broadband for more than a decade. To compare the best deals in Glasgow simply enter your postcode and see what packages are available in your area; you'll find all the best internet providers here, plus expert guides to help you choose.

The Genie guide to broadband in Glasgow 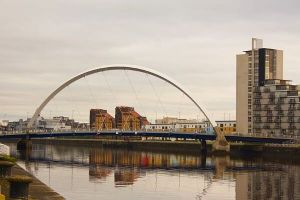 All of the main Glasgow telephone exchanges are now enabled for superfast broadband via the Openreach and Virgin Media networks, giving many Glasgow residents access to broadband speeds up to an average 518Mb.

But it's important to check coverage for yourself. Even if your exchange has a particular service it does not guarantee that it's available to your home. When comparing broadband deals, search using your postcode to see what's available.

With such hot competition between providers for broadband customers, there’s never been a better time to compare packages. Whether you’re looking for a cheap basic deal or an unlimited, all-inclusive broadband and TV deal, there are new special offers hitting the site every month.

As you’ll see from the table above you can order our comparison charts in the way that best suits you; whether its contract length or monthly price through to data limits or broadband speed. You can also to view certain types of offer, such as broadband with no upfront fees or WiFi only deals. Limited time offers are highlighted to make sure you don’t miss out on a bargain!

Glasgow enjoys good fibre broadband coverage. The table below shows the availability of superfast broadband and average speeds in different areas of the city.

The future of broadband in Glasgow

Ultrafast gigabit broadband may soon be an option for many Glasgow residents. Hyperoptic installed its first gigabit network at Glasgow Harbour in 2015. And construction began on a city-wide fibre optic network from CityFibre in late 2016.

Glasgow is also one of the areas chosen by BT to pilot its G.fast tech, which it is hoped will be able to provide broadband speeds up to 330Mb for 10 million homes by 2020.

Additionally, there's the Digital Scotland project, which is investing more than £100m in upgrading broadband infrastructure in both Glasgow and the rest of the country.

Alongside a strong home broadband showing, all the major UK mobile providers claim strong 3G coverage across Glasgow for their networks. For a full list of all the best deals, head over to our main mobile broadband comparison page.

If you’re serious about your mobile broadband you might want to consider a 4G deal. EE has had its 4G network up and running in Glasgow since 2012, while Vodafone’s and O2’s went live in 2013 and Three’s is available now too.

We’d strongly advise looking at the coverage checkers for each network before committing. Check all the areas you’ll need to connect to mobile broadband; or even better, check with friends on different networks to see how they get on. You can access the official coverage check tools by clicking the logos below: