Welcome to the Cumbrian corner of Broadband Genie! Here you can compare all the best best broadband deals near you, specifically in the Carlisle area - plus guides to cut through the technical terms and help you select the perfect deal. 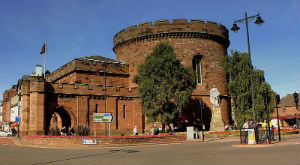 Most homes and businesses in the Carlisle area should be able to get at least ADSL using a regular telephone line over the Openreach (aka BT) network, though several exchanges are not LLU which will limit your choice of internet providers and packages. With only one exchange in central Carlisle and a few scattered around the outskirts, those at the very limit of the lines may find ADSL speeds fairly slow.

Fibre optic internet is an option in some locations. Central Carlisle has fibre over the Openreach network, giving speeds up to 76Mb, as do areas further afield such as Rockcliffe, Crosby-on-Eden and Dalston.

Virgin Media fibre is also available in some parts of Carlisle. The area was once served by the independent ISP Smallworld Cable but was taken over by Virgin in 2014 and all customers moved.

One easy way to see what’s available to your home is to enter your postcode in our comparison table. You'll then see broadband deals that have been filtered by location and only those providers offering service to your nearest exchange will be displayed. If you have specific requirements you can filter the table by factors such as broadband speed, cost and internet provider. You can also filter to show specific types of offer, such as free-setup broadband or unlimited internet.

Availability can still vary from home to home so you will need to run a further check to confirm, but your selected ISP will do this for you, in addition to providing a speed estimate.

Superfast coverage and speed in Carlisle

While Carlisle enjoys reasonably good access to home and mobile broadband, smaller towns and rural locations in the area are benefiting from more than £18m in funding for infrastructure upgrades, handled by the Connecting Cumbria project. 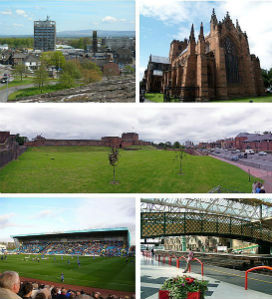 Carlisle and surrounding areas benefit from a good level of mobile signal coverage, enabling the use of at least 3G mobile broadband in both central and outlying locations such as Dalston, Burgh by Sands and Longtown. Three, O2, EE and Vodafone all report strong signal for indoor and outdoor use in central Carlisle and out to locations including Wetheral, Wreay, Great Orton and Rockcliffe.

4G is also present in Carlisle from all the network operators. EE has also upgraded some masts in Carlisle to double speed 4G which is capable of up to 80Mb.

An alternative to 4G is the ‘Advanced 3G’ offered by Three which offers a huge boost in performance over regular 3G. As well as central Carlisle this service extends south to Southwaite, south-west to Wigton, north to Longtown and east to Brampton and Carlisle Airport.

Mobile coverage is never guaranteed however so be sure to confirm signal strength before buying and mobile broadband package. Our guide to coverage has more detail, and you can also click the logos to access official coverage check tools: