When you're looking for a new broadband deal in the North East, Broadband Genie has you covered, with all the best broadband deals in your area. Simply enter your postcode to find the best offers in Newcastle from the UK's top providers - or read our independent guides to help you decide.

The Genie guide to broadband in Newcastle upon Tyne 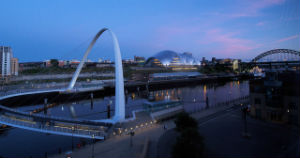 Newcastle’s fixed-line broadband services are comprehensive. All central and surrounding exchanges have been enabled for both ADSL and superfast broadband so those living in Newcastle have easy access to a wide choice of providers.

For broadband on a budget, there’s ADSL using the standard telephone line. The exchanges are LLU enabled, which means that in addition to BT broadband ISPs such as Sky and TalkTalk have installed their own equipment so you can benefit from the best speeds and prices.

If speed is important to you, Newcastle has the choice of fibre optic internet using either Openreach (the regular BT telephone line) or Virgin Media fibre network. Virgin is faster at up to 200Mb, but coverage can be more limited and some homes may not have been hooked up with cable. Fibre optic broadband over the phone reaches speeds of up to 76Mb and is generally available to more homes.

To begin comparing broadband offers you’ll need to find out which services you can get so start by entering your postcode in our comparison tables and we’ll filter out the results by location. Once you’ve done that the table can be sorted by features such as pricing, speed and data limit (although most deals will offer unlimited broadband).

The filters to the left are great for narrowing down your options; you can filter by speed, provider and also by certain types of deal, such as broadband only or bundled packages. We'll also flag added extras, such as vouchers or free setup. So you can be sure you're getting a  great deal.

Superfast broadband coverage and speed in Newcastle upon Tyne

Go Digital Newcastle is the city council scheme to bring superfast broadband to at least 97% of homes and businesses. More than £1m has been allocated to upgrading connectivity.

The future of broadband in Newcastle upon Tyne

Fibre optic provider Hyperoptic recently launched gigabit connectivity in the city, offering 1Gb broadband to developments including Hanover Mill, 55 Degrees North and Marconi House, with more to follow in the near future.

As one of the largest and most populated cities in the north of England, Newcastle enjoys easy access to services from O2, Three, Vodafone and EE.

3G is widespread right across Newcastle and out into the surrounding areas such as Gosforth, Byker, Gateshead, Whickham and Swalwell so wherever you go you should at least get 3G connectivity. Three also offers its ‘Advanced 3G’ DC-HSDPA service in Newcastle, which can provide speeds approaching 4G performance.

The newer and faster 4G is available from all networks in and around Newcastle. EE has also upgraded the area to double speed 4G which has a theoretical maximum of 80Mb. Be aware however that 4G is relatively new and continues to lag behind 3G in terms of coverage. While connectivity shouldn't be a problem in central parts of Newcastle it may be unavailable as you move further out the city.

It’s important to check coverage before buying any mobile broadband service. To find out more read our guide to mobile coverage and use the links below to access the official network signal tools to confirm for yourself: